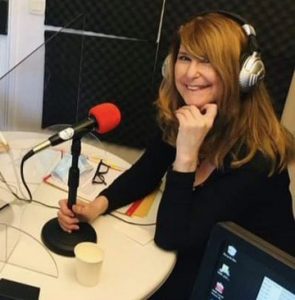 The time you realise Paris has become ‘home’! A 25-minute interview series hosted by various WRP hosts, including Patricia Killeen.

In this episode of Turning Points, Patricia Killeen welcomed Scotsman Jordan Kay. Jordan grew up near Glasgow and is a musician and music teacher. He was accompanied by Franco-Irish singer Maureen O’Donoghue, his partner in the Folk duo “Saelkie Folk.”

Jordan plays the 5-string Banjo, Autoharp and Bodhrán and Maureen plays Guitar and Fiddle. Both sing, with Maureen as lead vocalist.

“Saelkie Folk” play raw, folky and traditional songs and tunes from Ireland, Scotland and Brittany. Jordan and Maureen performed three songs from their repertoire during the interview, which really got the show on the road!

Jordan spoke about how after a touristic visit to Paris, 3 years ago, mainly to see Notre Dame, 9 weeks later he was back on a one way ticket to the City of Light and has been here ever since!

Jordan has had many Turning Points since arriving in Paris but one of most important was when in January 2021, he met Maureen, at an old time jam session in a mutual friend’s apartment. When Maureen sang a capella and he accompanied her on the banjo, people were blown away. Two weeks later, what was meant to be a solo performance by Jordan on the “Acoustic Nights Online” series actually became the launch of “Saelkie Folk” and the rest is musical history!

Jordan also spoke about his work as a music teacher and the many interesting students he has taught over the past three years in Paris.

Jordan and Maureen are planning their first international tour, but before that you can catch them at one of their regular gigs in Paris. Details on :

If you would like to reach out to Jordan for music lessons or “Saelkie Folk” for a private music gig (like we enjoyed in the WRP studio!): e-mail saelkiefolk@gmail.com

In this episode of Turning Points, Patricia Killeen welcomed Dino Salomon, a young crooner, whose “honeymoon” voice carries the banner for the Rat Pack, in the most authentic Parisian venues.
Born in Rabat-Morocco, Dino moved to France at the age of 18 to study History of Art, then studied Art and finally Japanese language and civilization.

When he arrived in Paris, he lived at the foot of Montmartre. One sunny day, he saw a singer performing on the steps of Sacré-Cœur and had an epiphany! He picked up his own guitar and spent years busking on the Sacré-Cœur steps, singing all kind of genres. After a lengthy period singing the Blues, Dino discovered early 1900’s music and found his genre and voice.

He built a repertoire based on Bing Crosby, Dean Martin and The Mills Brothers songs. He teamed up with pianist Sheldon Forrest and sung for years at the Club Rayé, and spent three years performing at the mythical Chat Noir.

Nowadays you can hear him at the magical Café Blanche.
For private concerts, alone or with other artists, contact Dino by email: tarexki@gmail.com
FB: @Dino Salomon
Instagram :@dinocrooner

In this episode of Turning Points Patricia Killeen chatted with Mariamne Everett who was born in Italy. Her family moved to Cork in Ireland when she was 12 and she is a British/American. Mariamne has been living in Paris for 6 years. She has a Batchelor of music degree from the CIT Cork School of Music and an Art History degree from the University of Paris 1 Panthéon-Sorbonne. She currently works as a translator for The Africa Report magazine which is part of the Jeune Afrique Media Group and she hosts the Hidden Paris podcast for WRP. She has recently been recruited as a journalist for Radio France International where she works one day a week.

During the interview, they chatted about her life and career in Paris. And since it was the day that French far-right media pundit Eric Zemmour announced he will run for president in next year’s election, they also discussed how the far right currently impacts life in the City of Light.

In this episode of Turning Points, Patricia Killeen chats with Tendayi Olga Chirawu. Tendayi is a third-culture person and mom based in Paris who writes fantasy fiction with strong female characters and diverse people doing incredible things all over the world.

She studied Global Communications and Civil Society at the Master’s level and has been working as a digital content and communications expert in the city of light since. She has written for several publications, including The Spire Newsletter, Quartz Africa, Insight Magazine, and more. She has also worked in professional proofreading and copy editing for over a decade.

In today’s episode, along with chatting about her life and her writing, Tendayi also presents her newly published novel, “The Glitter Horn”.

In this episode of Turning Points, Patricia Killeen went to the Moulin Rouge to interview two dancers, Claudine and Isabelle van den Bergh Cooke, sisters from Ireland. On 10 September, they fluffed up their feathers and went back to work at the Moulin Rouge, which had been closed for 18 months due to Covid restrictions.

The red windmill in Pigalle, is one of Paris’s most recognizable icons. The “Feerie Show” is played to a full house, twice a night, six nights a week. There are 80 Doriss dancers in the show, hailing from 14 different countries. 450 people work behind the scenes and the budget for the show is estimated at 10 million euros, including over 4 million for the spectacular costumes.

Claudine, 29, has been dancing since she was two years old and has been with the Moulin Rouge for over nine years and is one of the three principal dancers. She interprets the legendry “La Goulue” (1866-1929) whom artist Henri de Toulouse-Lautrec painted when she danced the French can-can and was star of the Moulin Rouge back in the Belle Époque

Isabelle, 24, found out she had successfully auditioned for the company while she was studying for her Leaving Certificate (high school graduation exams) just over five years ago. For her it was “a dream come true.” She was delighted to join Claudine in Paris. She loves dancing the French can-can and finds her background in acrobatics is a real plus for the energetic dance.

Claudine and Isabelle are delighted to be back at work. Being part of the world renowned Moulin Rouge is an honour for a dancer and a night out at the Moulin Rouge show, is a perfect way to celebrate the thrilling return of liberty in the City of Light!

Born in Cameroon, Jelly Germain moved to Paris when he was ten. As a young boy, he loved watching old jazz films, which kindled a passion for tap dancing.

Shortly after donning his tap shoes, he was noticed by Olivier Brard, conductor of the “Royal Tencopators” who gave him his first break. Initially autodidact, he subsequently enrolled in dance classes at the Candela Conservatory in Paris, took classes with Jacques Bense and enrolled in circus school. He was mentored by Cotton Club Dancer, Ralph Brown, and rubbed shoulders with tap giants; Buster Brown, Lon Chaney, Diane Walker and Chuck Green

In 1993, he toured with the renowned “Riverdance” show, and subsequently toured with “Black and Blue”. From 1997 to 2000, he performed in variety shows at the Sporting Club in Monaco and the Casino Rhul in Nice.

Over the years, he shared the stage with some of the greatest blues, jazz and boogie musicians.

He finally hung his hat in Paris, and has been entertaining us in the City of Light for the past two decades. He has his own band, “The Harlem Drivers” and a female dance troop, “The Starlites”.

On 31 December 2021, he will perform at the “Les Paris Follies” gala, organised by “La Bâronne de Paname”, at the mythical, roaring twenties brasserie and ballroom “La Coupole”, razzle-dazzling us into 2022 with a sparkling, sensational program. (Facebook: labaronnedepaname).