Dec 8,2021 Comments Off on Mariamne Everett on Turning Points 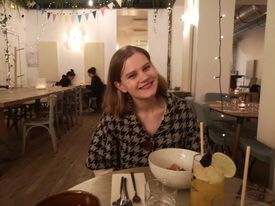 In this episode of Turning Points Patricia Killeen chatted with Mariamne Everett who was born in Italy. Her family moved to Cork in Ireland when she was 12 and she is a British/American. Mariamne has been living in Paris for 6 years. She has a Batchelor of music degree from the CIT Cork School of Music and an Art History degree from the University of Paris 1 Panthéon-Sorbonne. She currently works as a translator for The Africa Report magazine which is part of the Jeune Afrique Media Group and she hosts the Hidden Paris podcast for WRP. She has recently been recruited as a journalist for Radio France International where she works one day a week.

During the interview, they chatted about her life and career in Paris. And since it was the day that French far-right media pundit Eric Zemmour announced he will run for president in next year’s election, they also discussed how the far right currently impacts life in the City of Light.